Today, I am continuing with level design. It is really exciting to do these levels now because the game has more components in it – trapdoors and keys open up new ideas and possibilities. As you can see, I am currently developing level 34. The screenshot is actually an early level 34. The final level has much more stuff in it! 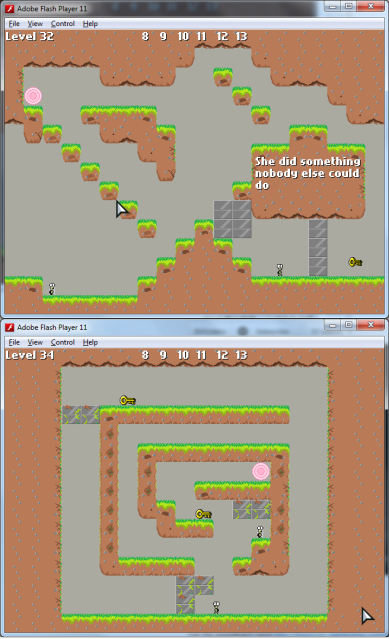 I actually have two phases of when I actually think about how to make the level. The first phase is when I first get the idea. When sketching, I seldom make levels complex – my ideas are rather rough sketches of a few platforms and puzzle elements.

But when I actually get on to coding the level, the placement of the trapdoors and keys and such, I begin to add more elements to make the level more exciting. Usually when coding, I’m still thinking about the level design, and much of the time I’d have to think about how I would play the level as a player. For example, a level I’m designing now has a pair of PINK doors and a pair of BLUE doors. As the coder, I want to tell the player that pink doors are for the girl player, and blue doors are for the boy player. But then as I imagine myself playing it, I realise that it is possible that the player might think that the colour codes of the door simply tells where you will come out from when you enter it. And at that time, I put the two doors next to each other. Perhaps by coincidence, the player will not find out the actual purpose of me colour coding the doors. That’s why I’m now enhancing the level now to make sure that there is no room for error.

I’ve updated the trapdoor graphics to have that forest feel. When playing the game, look closer at the doors when they animate. The “leaves” will fall and the vines will snap! That was inspired when I thought copy and pasting the doors would be boring and I thought something else should take place when the doors open.

I was actually considering if I should make the metal trapdoors be a lump of thick vines instead, and the keys to be some sort of  “scissors” that will cut the vine, and the animation will play the scissors snapping the vines apart, thus “unlocking” it.

At the moment, I plan to make the keys less golden and have more grime and dirt, with mud stains on them to give it the forest feeling. The idea for making the keys and doors have a forest theme was an idea contributed by my friend Li Hao, who tests my game for me ^^ He’s my only tester actually =( and the rest of the people only tested the game once, which was when it was still in early development, having just a couple of levels.

Currently, I have one really tough problem that I cannot seem to solve:
– *Turtle characters are too small

My sprites are actually 10 x 20 each. That is really small! I don’t think you know this but, I never meant to have turtles as main characters in the game until it was pointed out to me that boxes (the original “characters”) were simply unacceptable, and it would be “disappointing” if I were to make the game have boxes as main characters.

The boxes did not have detail, so I thought a size of 20 x 20 was appropriate. It was only just a few days ago did I finally decide to draw and add the turtle animations. Since the turtles were standing up and took on a rectangular form, I cut the size to 10 x 20. THIS WAS A DISASTROUS MOVE.

I had simply too little space to draw the turtles. I drew them 16 x 32 instead. But the problem with using paint is that the game engine does not seem to be able to scale the graphics down properly because it’s made of pixels, which meant that all my graphics were SCREWED. I had to redo a 10 x 20 version of all my turtle animations, and keep the 16 x 32 version for when the turtle is bigger.

It really sucks to have those small graphics. It’s hard to draw and hard to see. Perhaps if I had planned to use turtles from the start, I may not have this problem now. I tried to enlarge the turtles now but the problem is that the platforms are 32 x 32. Enlarging the turtles to 16 x 32 means that while their feet are on the ground, their head would already be touching the ceiling! That makes it horribly hard for me to design subsequent levels because I have to leave a two-grid spacing. I don’t want the characters to look like they are so tall that they are made to squeeze through walkways that are just the same as their height! They also wouldn’t be able to jump with their heads touching the ceiling.

Other problems I face in the code:
– Player will overlap onto the blocks when they hold a directional key, and when they jump while overlapped, they will collide with the door above, as though there was an invisible ceiling

One possible enhancement (I have many, but I will just name the one which I think has the highest success rate for me to implement):
I thought of decorating the map with some cool objects, such as perhaps a tree with falling leaves, or grass that will sway, and putting these occasionally around the map to break the monotony of how everything seems so conformed to grids and how uniform everything appears to be.