The one thing about the art in this game is that it goes through several iterations to try and reduce imperfections. One thing in the game that changed the most was the Main Menu. Yup. If you saw the final version of the main menu, let me just let me show you what the first main menu in the game actually looked like:

Go ahead and giggle at it

The old design had turtles appearing when your cursor rolls over the button.
Well, of course, that was until I looked up the main menu of other games, as well as some screenshots of very nicely designed Main menus found by Li Hao, who felt that my Main Menu could be improved.
So I went through some of the old pictures I drew in my free time (I have lots of those), and picked a few pictures that I could possibly use as a background. Li Hao saw the following, and he remembered that this image I drew was really good: 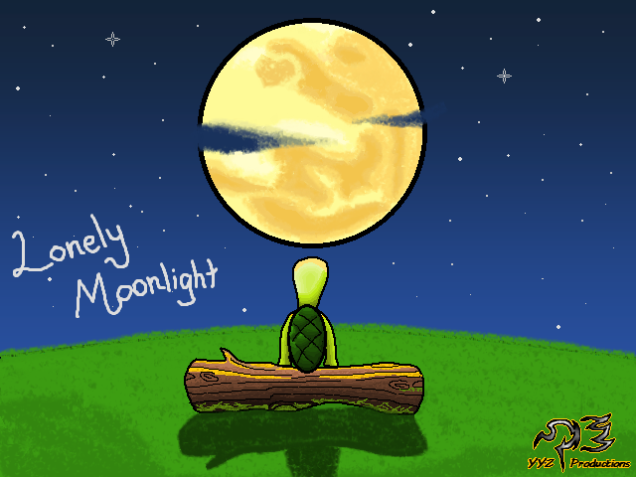 He said this would make an awesome background for the main menu
The new buttons did not fit with this picture, so I redrew all the buttons. I didn’t have Photoshop at the time, so I made use of Powerpoint. Adapting the colour scheme I used in the Main Menu, I redesigned the buttons.

The New Main Menu was awesome and good looking though drawn in Paint. I removed the fake stars, and added animated stars: smallStar, mediumStar and bigStar. It was only after two weeks since the start of the project did I actually incorporate this nicer looking main menu and have the stars twinkle in the background.
It was 3 months later when I started experimenting with the powerful tool, Photoshop. Li Hao said to me before that the buttons could still use improvements, and that they looked “plain”. So I tried to use Photoshop to create buttons.

I also drew CLOUDS. And coded them to sweep across the skies every so often
The new “GALLERY” button I added had texture and looked better when put directly above the old buttons in comparison. So guess what I did?
If you guessed “redraw all the buttons again”, then you are right. So, I redrew the buttons!
But now, the buttons look relatively good as compared to the menu background. As I evolved to use Photoshop more and more, I decided to see what I could do about the menu.

bg_menu6.png
Graphics improved! I ended up redrawing almost every single thing. Except the grass of course. MS Paint grass surprisingly looks good. I even changed the tinge of sky colour because I felt the sky was too bluish. bg_menu7.png
Graphics improved! Again! The moon is removed in this picture because I changed the moon to be a separate .png after I redrew it. To be honest, the moon was already good looking enough in the old version, but the black outline just doesn’t fit the entire theme. If you noticed, I removed the black strokes of almost everything. I also redrew the buttons, because this sunrise sky does not match with the blue buttons.

Thankfully, I don’t have to redraw the buttons. A hue change was good enough. Same thing goes for the blue clouds that sweep the skies.
So there it is. The final menu. The Introvert game logo was changed as well, including animating turtles instead of squares after a game-breaking change to use turtles as characters in the game.

If you play through the game far enough, you unlock the sunset background. I added the blue background in the end as well, but not the black one. You can change the colour scheme with the bottom right colour scheme buttons. So I guess, my effort of drawing the blue buttons and skies didn’t go to waste 🙂
So that’s all right? Well…
I did a small change today, and improved the wooden log in the menu. Every time I compile and run the game to test it, I arrive at the main menu and I almost always look at the log that seems out of place somehow. So today, I finally couldn’t take it and went to readjust it. It was a few minutes of work, but I think it is looking much better! (Left version is the improved log, right is the OLD one I kept staring at.)

Secrets
There are a few tiny secrets to the main menu. I’m not sure how many people will find them though, but when someone does, I hope to be able to see his/her reaction!