This post will detail all the stuff I’ve done from 31 July till 15 August.

Now that the game has several difficulty modes, I needed a way to indicate on what difficulty a level was completed on. Previously, I had the level buttons be Stars, and it turned out to be very ugly. I couldn’t find a way to present this data in a nice, presentable way, but I think today I’ve gotten somewhere. I wanted a simple dot above the pink circle, but I think a star is a bit more interesting and more symbolic.

World Map
One of my old ideas for the Level Selection stage was to have a world map and make each area clickable, to assess each area’s levels. This idea was scrapped. The game didn’t need a world map.

Yet today, I was bored and had some spare time at work, so I drew a more detailed world map (never had any true sketches) and I wonder if I can use this in any part of the game… maybe to show the different areas all in one screen at the start? 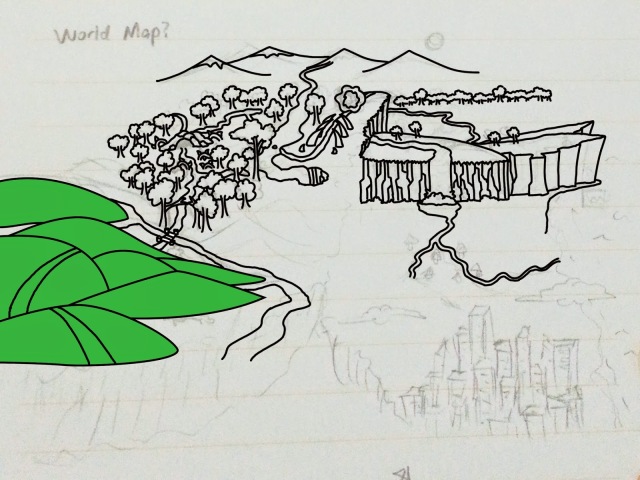 The world map is rather complex and I actually am progressing quite fast thanks to my WACOM which makes drawing something so detailed easier.

I guess it also pieces the events of the story more solidly than using the 4-box icon to represent each area.

The world map would look much better than this, right?

Auto move
This game gets more AI-intensive every once in awhile. There’s lots of things my friend wants to see in the game and one feature is “auto move”.

Forest Vines v3
I had spent a few hours revising the spikes/vines sprite.

These are how the new spikes in the game will look like.

Spikes in the game had undergone much revision and my previous spikes, while looked more fitting in the forest theme, looked very thick and wasn’t very ordinary. I made them a lot thinner, but the real challenge was getting the vines to “touch” each other correctly.

I use a series of connected spikes, and they can be rearranged in certain patterns to prevent spikes from showing up in a repetitive manner.

For example, in the screenshot above, Spike #2 can be connected to not just Spike #3 but to Spike #5 and Spike #6 as well, which means I can set up my spikes in several different combinations so the game doesn’t look so “artificially generated”.

The tough part which I spent a lot of time on was not the drawing, but to arrange the width of the edges of the spike to pixel perfectly match and look smooth when connecting to other spikes.

I also drew two new spike frames #8 and #9 (not in screenshot), to reduce the repetitiveness of some single, stand-alone spikes in the game which made the environment look fake with my old spikes.